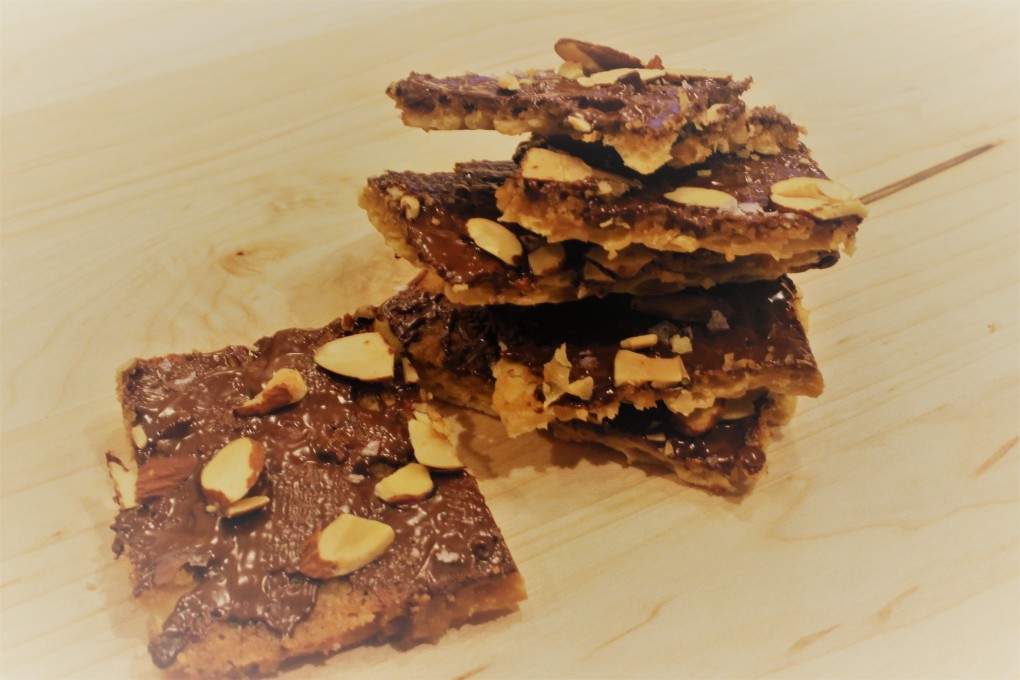 Caramel-crisped matzoh topped with dark silky chocolate and slivers and crunchy almond.  Is it a cookie?  Is it candy?  Does it really matter … it’s delicious.

And it is … absolutely marvelous.

Every year when I bake the matzoh crunch, I’m reminded of a fictional account of a near-death experience in a blinding snowstorm with four of five siblings and one Mario-Andretti-Wanna-Be sister-in-law behind the wheel of a rented minivan.  As the story goes, there was a tradition, some years back, when available siblings and MAWB would make a weekend road trip between Thanksgiving and Christmas to a place within driving distance of their homes to sample and pick up beers and other provisions for Christmas.  One of these trips was to Montreal.

This particular trip began on a Friday after work in the D.C. area which meant a nine hour drive (though MAWB was sure it could be done in under eight… and it was), stopping only for gas and visits to the loo.  Somewhere deep into the night, deep into the mountains of Upstate New York, and deep into a driving snow storm, with MAWB at the wheel, only the two youngest siblings stayed awake to keep her alert.

MAWB was regaling the siblings with one story or another when all of the sudden she stopped talking and perked right up because she saw through the driving snow an “exit” sign which meant a stop to stretch her legs, get a coffee, and pass off the driving duties to her SO who was snoring, oblivious, in the passenger seat next to her.  As MAWB began to veer off to exit the highway, the siblings began screaming in unison that the van was not exiting the highway onto a ramp but exiting the highway off the side of a mountain (at a speed required to get to Montreal several hours earlier than mere mortals could make it, ahem).

The already screaming siblings began waling at volumes and octaves not heard outside of rooms of torture,  hugging one another, saying their last goodbyes and I-love-yous, sure their death was imminent.  The exit sign was, in fact, an Exit Ahead sign.  Two miles ahead.

As if on a Sunday ride with perfect weather and not a care in the world, MAWB veered (some may say caromed, careened, two-wheeled it) back onto the highway thus avoiding the imminent demise of four-fifths of a contingent of siblings and one MAWB singlet.

Either the noise or the rollar coasteresque driving woke the unsuspecting spouse-who-brought-MAWB-into-the-family.  In whichever case, his high-volume discontent was expressed followed by the demand that MAWB pull off at the next ACTUAL exit for a driver switch.  The exit was found, the drivers switched, and the merry band of travelers were on their way.   If I were the sort of sibling who would go along on that sort of adventure, I’d have been fast asleep on the back bench of the van, missing the entirety of the high drama.  For this, I am forever grateful.

On this mythical trip MAWB was also responsible for a many-hours forced march in sub-sub-freezing temperatures. She promised great beers and wonderful food at the end. Whelp, Cheval Blanc did have great beers (still does) but the microwaved hotdogs and pseudo-nachos served on paper plates with a side of crazy homeless man who came to sit with us and draw our group pictures would today give MAWB a zero yelp rating as tour guide though probably top marks for good memories.

If you’ve made it this far and your thought bubble reads: “What the hell does this have to do with matzoh?” Ah, yes … patience, grasshopper. Legend has it that Absolutely Fabulous Caramel Matzoh Crunch was along for the ride and sustained the travelers from DC to the great province of Quebec, with some understandably vigorous stress-eating from Upstate New York to their arrival in Quebec.  Thenceforth and forevermore, to my mind, matzoh crunch, family trips, and near-death winter driving adventures go hand-in-hand. Mazel tov!

I’ve been making this confection of deliciousness for a long time but don’t remember where I got the recipe.  My thanks into the ether to whomever shared the original.  I’ve made it my own and tweaked it over the years to what it’s become now, a crunchy, bit o’salty, slightly chocolate sweet nibble worthy of gift giving, a party cookie tray, or just you and a cup of coffee.

Happiest of holidays and safest of driving to you all. On to the recipe! 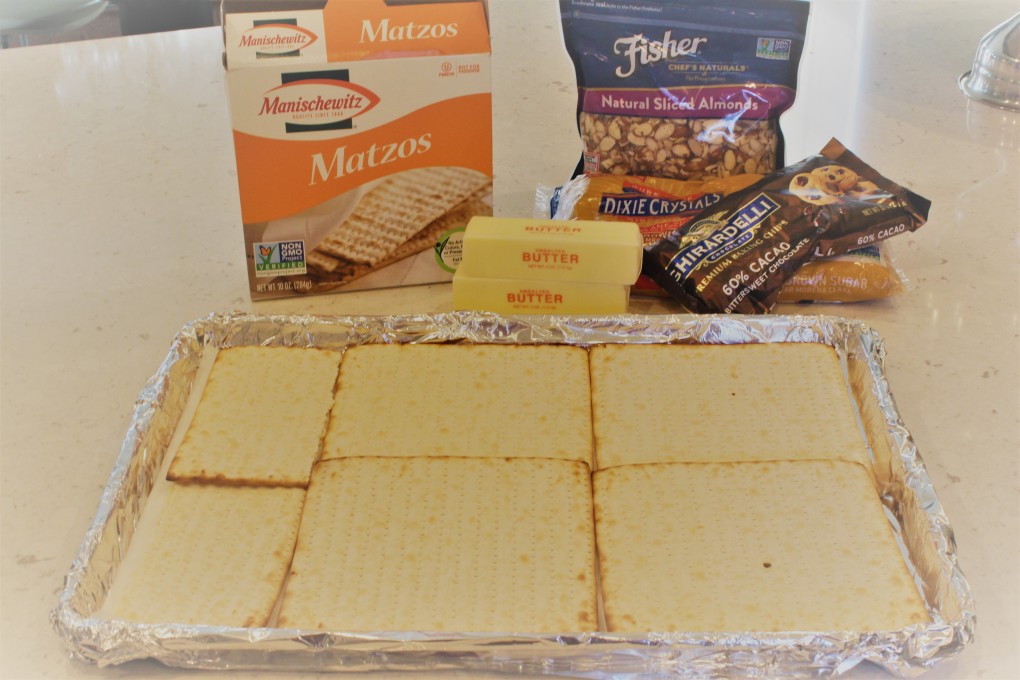 All in, this recipe has only six ingredients: matzoh, butter, brown sugar, chocolate chips, toasted almonds and finishing salt.  It comes together pretty quickly though needs to sit for several hours to set.  Then again, there’s nothing saying you can’t do a little taste test or two.  Cooks treat.

VERY IMPORTANT NOTE ON MATZO: Read the label.  Carefully.  Onion Matzo does not a good caramel crunch make.  You. Have. Been. Warned. 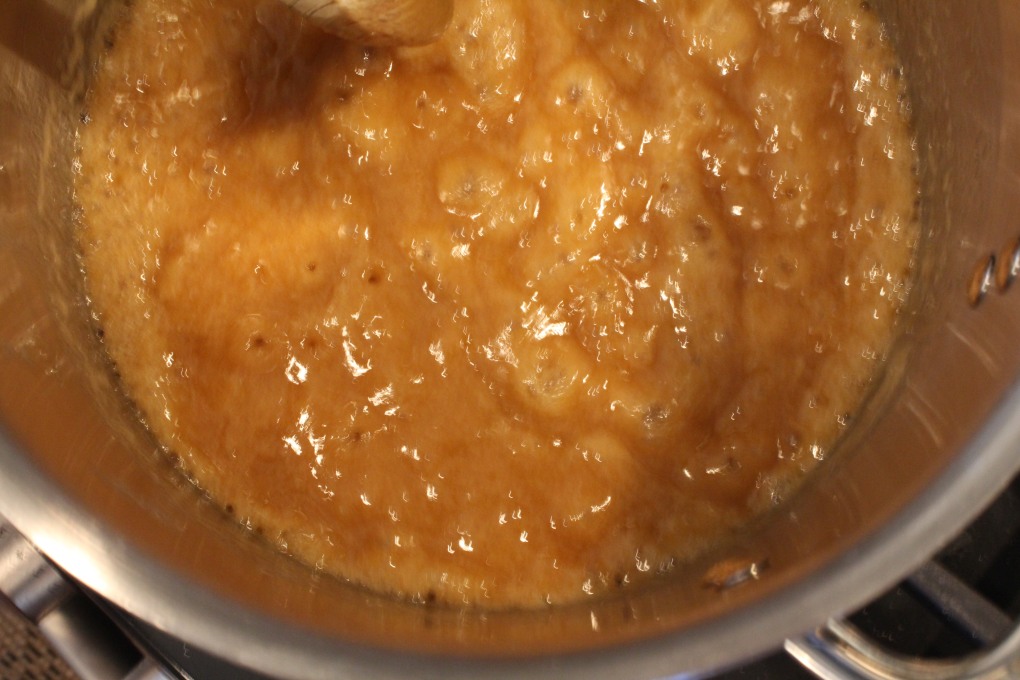 In explanation/excuse for the lack of photos, I am very respectful of the pain melted sugar can cause so I kept both eyes and the good part of my brain on the stove.  And then I sort of completely forgot to take pics again until I had chocolate on my fingers which made me choose between tasty and the business end of things and, well, you see what won out. 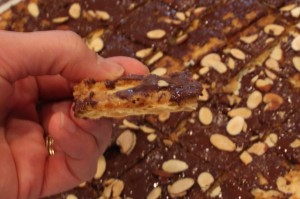 Since this post has completely lost the plot anyway, what’s one more totally unrelated segue … Anyone else have Matzoh Man (yes I know the real title) running through your head? If it’s not ringing a bell, please go check it out on YouTube (you’ll need to look for Macho Man by the Village People).  You are most welcome.

Line a half-sheet pan completely with foil. Cover the bottom of the foil-lined pan with parchment.  Line bottom of pan evenly with matzoh boards, cutting extra pieces of matzoh to fit any spaces on the cookie sheet as evenly as possible.

Melt the butter in a 3 quart, heavy-bottomed, saucepan. Add the brown sugar and cook over medium heat, stirring constantly, until mixture comes to a boil. Continue cooking 3 more minutes, stirring constantly. Remove from heat and pour over the prepared matzoh. Use your stirring spoon to spread the caramel so that it covers all of the matzoh surface.

Place the sheet pan on the center rack in the oven and immediately reduce heat to 350 F. Bake 15 minutes, checking after 10 minutes to rotate the pan (back to front) and make sure edges are not burning. If the matzoh seems to be browning too quickly or headed toward burning, remove from oven, lower heat to 325 F, and replace the pain for the remaining time of the 15 minutes.

Remove from oven and sprinkle matzoh boards immediately with the chocolate. Let stand 5 minutes then spread the melted chocolate over the matzoh. You can stop at this point and will have made the original recipe.  I like to sprinkle with toasted sliced almonds and a nice big pinch of Maldon flakes (any finishing salt will work; do NOT use table salt or kosher salt).

While still warm cut into squares or wait until it’s set to break into odd shapes.  Set on the counter to set overnight or, especially if your kitchen is warm or you are in a hurry, chill in refrigerator until set.

These store well for a week or two (I’ve never had them longer) in a cookie tin, layered between parchment.  If you use a plastic container (least best plan), keep in the refrigerator or they become very soft.

Please let me know what you think Cancel reply

Recently From the Kitchen